Originally posted by Elaine Ou on her personal blog.

In case you were wondering what tech billionaires are up to these days, here’s a hint:

Would love to see your collection

here is my collection. i would love a native mobile app (android of course) to manage my collection and buy more and breed. also a link to share out my collection. couldn’t find that. (cc @aweissman ) pic.twitter.com/jSR44Eb78e 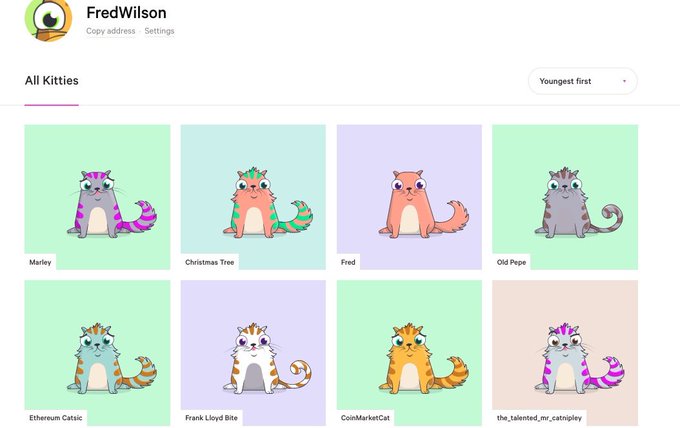 That’s right, they’re breeding digital cats on the blockchain! CryptoKitties are here, and they’re priming Ethereum enthusiasts for an assured future as cat ladies. After just five days, CryptoKitties is the most popular application on Ethereum, accounting for over 15% of all transactions on the network. What better use case for an unstoppable world computer?

Remember when digital kitties didn’t need to live on a blockchain? Back in the 90s we had Catz, and they roamed the background of a user’s desktop. Catz featured a primitive AI where the animals developed personalities depending on user interactions. If the cat was neglected or abused, it would run away. And yes, users could breed, adopt, and sell their Catz.

The Catz craze lasted maybe six months. Much like real-world pets, desktop animals get tiresome after the novelty wears off. The parent company followed up with digital Dogz, Hamsterz, Horsez, Pigz, Bunnyz, and Guppiez, but nothing really stuck; users invariably got bored and left their Petz to starve or run away.

To improve user retainment, the Petz brand came out with a new product: Babyz. It was the same basic game engine wrapped in the skin of a Cabbage Patch Kid. While Catz was mainly used as a desktop distraction, Babyz was designed for long-term emotional bonds. Users could talk to their digital baby through a microphone, and eventually the baby would learn to speak back.

Babyz couldn’t breed like the other animals, but they also couldn’t die. While most people have no qualms deleting a tired pet, the situation is different with a digital baby, especially one that has learned to talk. Compassionate users set up virtual orphanages where people could put their unwanted offspring up for adoption. Thousands of Babyz languished in online homeless shelters until the game was discontinued in 2000, at which point the children were digitally euthanized.

CryptoKitties boasts that their cats can’t be destroyed, but the whole point of a digital creature is that it can be destroyed. Dogz and Catz run away, and digital Guppiez go belly-up — These are features, not flaws. They remind us that commitment is futile and that life is just a long process of being abandoned by everyone we ever cared about until we die alone. The advantage of a virtual pet is that we can delete the evidence and move on.

Just like its predecessors, CryptoKitties were made to be abandoned. This time it happens on the blockchain, where CryptoKitty remains are replicated across thousands of computers all around the world, persistently occupying real estate long after we’ve given up on them. This is probably what it’s like to have kids.

Elaine is an engineer at Global Financial Access, a company that works on cryptographic integrity for smart contracts. She is a core developer for Ethereum Classic and contributor at Bloomberg View.